A film wrapper from STREMA®

Een foliewikkelaar gezocht? From a few pallets to 150 pallets per hour. STREMA® takes up these challenges.

STREMA® offers reliable film wrappers for every industry. The German manufacturer of film wrappers STREMA® has been active since 1981 and has all the expertise in the field of film wrapping in-house. Film wrapping is in our blood. Because we only deal with film wrapping technology, our products are extensively developed and extremely reliable. It is not without reason that many film wrappers run 24/7 at many satisfied customers throughout Europe.

Some of these customers have helped us with the further development of our products. You too can benefit from these extensive experiences. STREMA® B.V., 100% subsidiary of STREMA® GmbH is happy to help you with the packaging of your pallet loads.

We are happy to share our knowledge of film wrappers with you!

Since 1981 STREMA® has been engaged in the development and production of advanced film wrappers. Our customers are setting increasingly higher packaging requirements, stable packaging at minimal packaging material costs. This requires specialist knowledge. STREMA® has this knowledge in-house. We are happy to share this knowledge with you!

Why actually wrap a pallet with wrapping film?

This question is central. After all, packaging materials and film wrappers increase costs. Almost all products that are stacked on pallets are not stable enough to be transported without packaging. Packing these loads can be done in several ways. Wrapping with stretch wrap film is the most commonly used form, the most flexible and the cheapest option.

Why pre-stretch the wrapping film?

The stretch wrapping film used for packing loads is made to be pre-stretched. This pre-stretching improves the properties of the stretch film, which ultimately results in better packaging. For example, there are stretch wrapping films in the market that can be stretched up to 350%. This means that 1 metre of unstretched film can be stretched up to 4.5 metres. The most commonly used thicknesses of the stretch film vary between 15 and 23 microns.

The stretch film also has an adhesive side. This adhesive side ensures a better bond of the total load. In order to be able to pack your loads efficiently and stable, the stretch wrapping film must be taken to the extreme. If the stretch wrapping film is stretched less than it can handle, a lot of elasticity remains in the film. The packaging will continue to move a lot. If the stretch film is stretched too much, it will break. This is also an undesirable situation.

‘Also, the film should not damage or crush the corners of the loads. This requires a precise balance between the pre-stretch, tensioning of the stretch film and the adjustment possibilities of the film wrapper.

Why a STREMA® film wrapper?

With every STREMA®, the tension in the film between the film carriage and the load, is perfectly infinitely variable at different levels. In combination with the electronic control, a perfect packaging is created with low film consumption. During the finishing of the film, the film is sealed over its full width against a counter plate, both film layers are of the same thickness and can therefore be sealed reliably. Loose wisps of the film end tail are thus avoided.

Because the STREMA® film wrappers get the most out of the stretch wrapping film, packaging costs are low and we have as little impact on the environment as possible. Saving on variable costs starts with STREMA®!

STREMA® builds all its products from A-quality components. This has several advantages:

The STREMA® fully automatic film wrappers are equipped with clear and user-friendly Touch Panels. Operation is the same for all models. The Touch Panels are equipped with many icons, the pictures show what is meant. All movements can also be operated manually. In the event of a malfunction, a malfunction number with description is displayed on the Touch Panel. The operator then knows immediately where the problem is occurring.

The Touch Panel is provided with several languages. Can be easily switched to another language. Various password levels make it possible to protect certain areas. The setting of the film parameters is also set from the Touch Panel.

Changing from an empty roll to a full roll of stretch wrap film is also very easy. Thanks to the advanced film carriage, the film can be placed completely “outside”. The operator does not have to pass the film between all kinds of stretching rolls. The height of the film roll change position of the film carriage can also be adjusted at the request of the customer. This ergonomic solution saves a lot of annoyance.

Choose from our products: 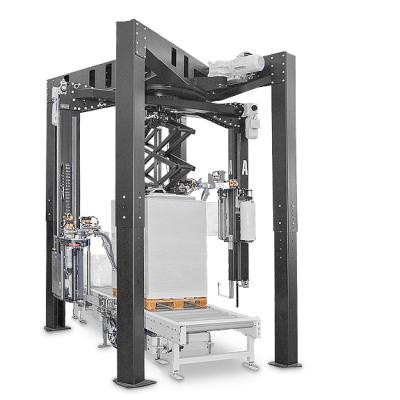 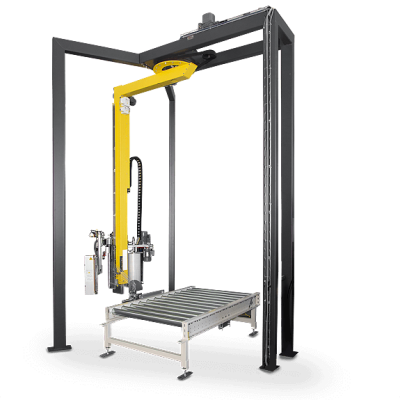