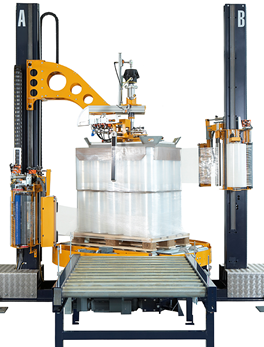 A common problem in a production environment. Certainly when it comes to existing construction. STREMA® recognises this problem and has come up with a solution. A turntable wrapper with two masts, rotation-driven hold down plate with film clamp. And two film carriages with twice as much film on board.

Advantages compared to an arm or ring winder