With the variable wrapping distribution, the film is applied in the area on the load where it is needed. For example when wrapping PET bottles. The “buckling point” lies between the first and second layer. The buckling can be prevented by applying extra film over the entire load, but this drastically increases the film consumption. STREMA® chooses to only apply film where it is needed. This is possible thanks to the variable wrapping distribution. Film savings starts with STREMA®. 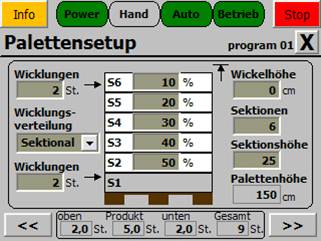